"Hidden deep in Archos' frozen mountains, frost dragons are revered for their crystalline scales that glitter in the sunlight. Though powerful, they treat other creatures with kindness unless they sense aggression. Their deafening roars could cause a catastrophic avalanche."

*Note: As of 1/12/2021 Frost Dragons do not spawn on most or all servers and have not for some time according to active players. Numerous online forums and discussions indicate that there was a bug with spawn rates when developers shifted attention to developing Dark and Light mobile, and rather than fix it, they were removed, hopefully until developers return once mobile is released.

Frost Dragons can only be knocked out by using Iron Hook Arrow.

To tame one, players could either:

- Use cobweb of crystal ball spells to slow them down, while unloading hook arrows into the dragon. Repeat as necessary until the dragon is down.

- Build a trap/cage and lure the dragon away from the ice cold mountains, and shoot it down within the trap walls until it is down.

Once down, the Frost dragon's constitution does not drop too drastically, and it eats at a somewhat slow pace.

Frost Dragons have the following preference:

The Frost dragon, although slightly weaker than its fire cousin, still holds its own decently well in battles against most Dark Creatures. It has a left-click bite attack, and a frost breath for its right click ability. It is a fairly fast flyer, and scares goblins away if they get close.

Its weight can come in quite handy if you're making back and forth travels to your Faction's town, much like a Griffin, but it is also quite tank-y, and is a good ride to take into battle during Dark invasions; just be cautious not to get greedy. Otherwise, it makes for a decent meat and hide gatherer, as well as ice chunk stacks, and as most other creatures, it will loot any saddle, weapon, etc., from Dark creatures. 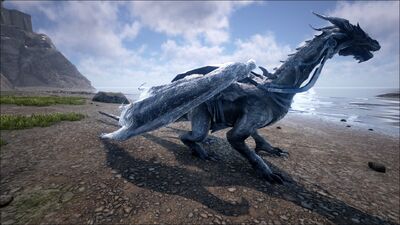 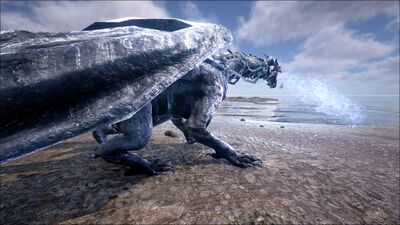