Griffins are majestic, adaptable creatures that mainly live in mountainous areas but you may catch a glimpse of them soaring through the clouds of other regions. Griffins can sprint across long distances and pounce on unsuspecting prey with their devastatingly sharp talons. However, their real strength lies in their aerial dominance - with unmatched flying speed and powerful offensive capabilities, a well-organized formation of players astride griffin mounts can easily wipe out an unprepared village.

An elite variant of the Griffin can be found in the wild and has a chance to transform into a Sacred Griffin.

Wild Griffins are not that much of a threat that one would expect. They aggro to you from a medium range, their flight speed in average and are below average fighters.

The griffin can be tamed. They take a lot of hooked arrows to knock out so be prepared. While attempting to knock out the griffin it will fly away from time to time, don't worry though they almost always come back to attack you. Once knocked out the griffin will eat a lot and fast but it's torpidity drain is rather slow so it will stay asleep for some time.

The griffin like every carnivore has the following preference:

Ctrl or Alt gr button will activate its charge attack that does significantly more damage than the left click but also costs more stamina.

The griffin can only pick up small and medium sized allied units such as: 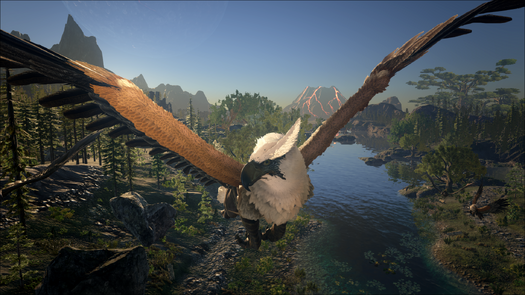