Mysterious, magical creatures that resemble horses, unicorns use their spiral horns to defend themselves against danger. Despite their defensive ability, unicorns are easily frightened, and will often choose to run instead of stand and fight. If left alive for long enough, unicorns can evolve into the holy creature known as the Pegasus. Unicorn horns are also highly valued for their therapeutic properties. (Text from the press kit)

Unicorns are not by any means a difficult tame. (They are fast, suggest trapping them. LVL 8 needs about 12-15 herb feed and about an hour). They are quick, but low damage, and once tamed, have the ability to heal all creatures and players within a certain vicinity at the great cost of a slow regenerating magic/focus pool. This is also accompanied by a projectile attack that fires a fast orb of light originating from their horns, and a fast long-distance charge attack.

An elite variant of the unicorn can be found in the wild and has a chance to transform into a Pegasus.

The unicorn can be tamed and prefers the following food while being tamed:

Set up framework foundations and walls around it before hooking it expand the framwork as you need so it is able to break the lines then simply hook it untill it goes down this will pervent it from escaping you and prevent near by hostile creatures from attacking it.

The Unicorn's primary use is to quickly heal injured beasts and players with a mystical healing aura that can be turned on and off on command. This consumes a significant amount of magic, and requires a long recharge time.

Put it on wander to reduce recharge time quickly. 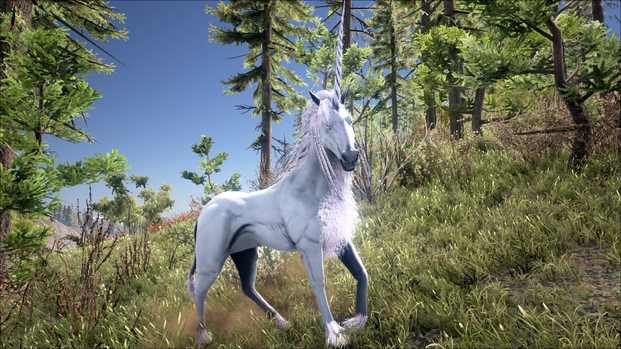